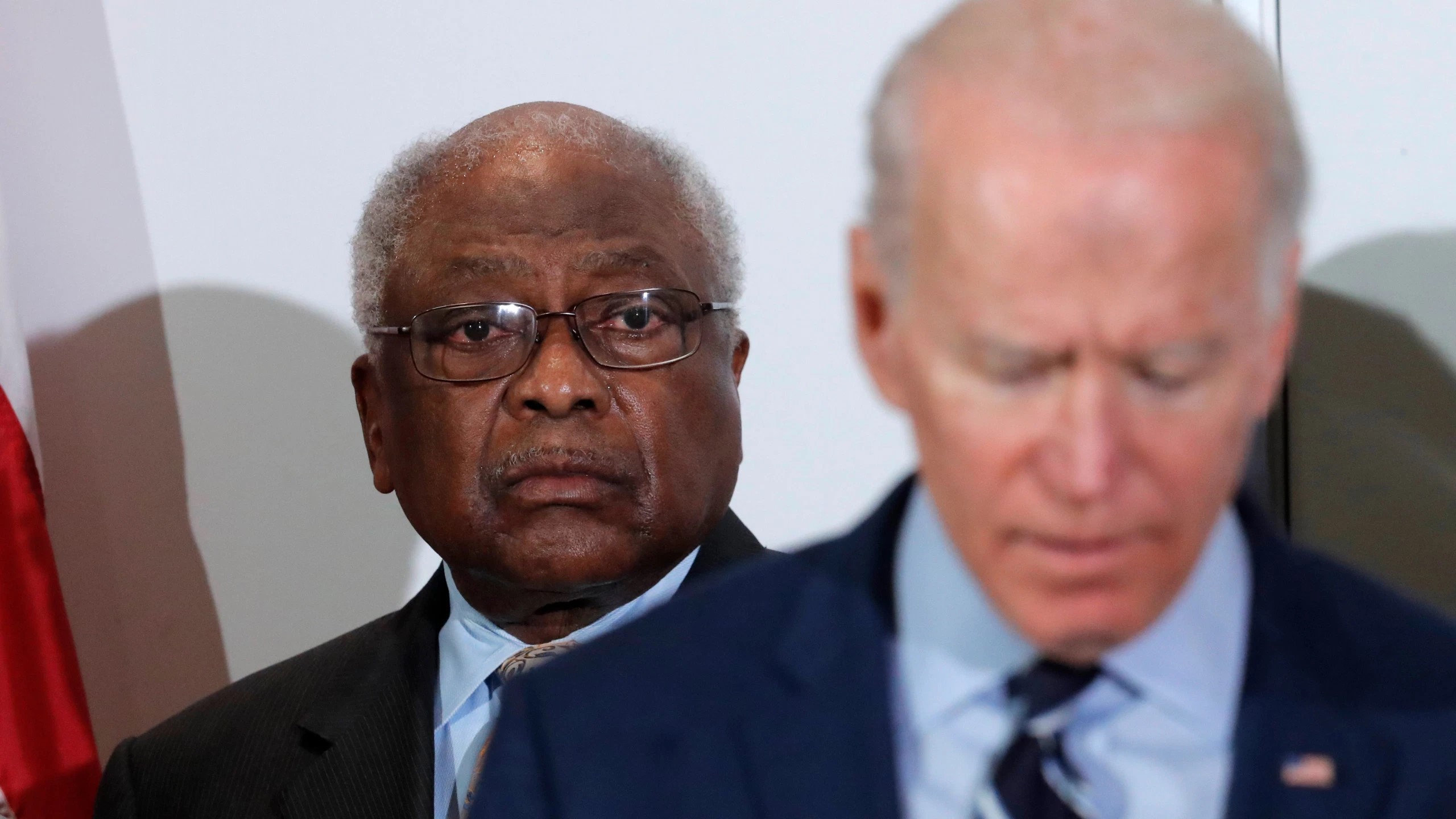 Joe Biden and Jim Clyburn come from a dying era. Joe is 77, and Jim is 79.  It is an era of the old Democrat South.  Two Democrats from slaveholding states.  One Black.  One White.  One, a White Master. The other, a Black Slave. Biden, Clyburn and every Democrat in the Black Caucuses still believe in the inferiority of Black people and the superiority of White people.  Their prideful actions toward their terrible leadership and their histories of absolute failure can provide no other explanation.  If Joe Biden cared about the upward mobility of Black People, Jim Clyburn’s endorsement would be as welcomed as the endorsement of the Grand Wizard of the Ku Klux Klan.

Joe and Jim still believe in the forced integration of Black Americans into White society at all costs.  How could they believe this unless they believe that Black culture is inferior?  Jim and Joe still believe in court-ordered Affirmative Action.  How could he believe this unless they believe that Black people are too inferior to compete?  Joe and Jim believe that the word of the White Man is more important than the word of GOD.  Accordingly, they have evicted GOD from the government schools, from our public functions and have plans to evict him from the face of the earth.  Jim and Joe believe that Black lives do not matter.  Accordingly, to ensure profits from abortions, profits from the selling of baby body parts and to satisfy their satanic need to kill, they have supervised the industrial-scale murder of approximately fifteen million Black babies since Jim’s election in 1995 and thirty million since Joe’s election in 1974.  They have even expanded the viability of this murderous activity from 3 months until after birth while advocating for full government funding for this satanic activity.

These two men have been the primary architects of the cultural genocide taking place under our very noses in the Black Community.  This genocide has taken a proud GOD fearing, hard-working and family-oriented Black Community and is turning it into a narcissistic, criminal-minded and irreligious mob.  It is because of this, not despite it that the northeastern liberals have poured tens of millions of dollars in Clyburn’s campaigns to keep him elected and has thrust him into the Democrat Party leadership.  This then makes him arguably the most powerful Black Democrat in America.  It is a reward for keeping the  Blacks in his district mostly poor, ill-educated and on the Democrat Plantation.

Jim and Joe have rejected every opportunity and deject every overture that will put parents in charge of their children’s education, allow citizens to defend themselves, keep illegals out of their communities, re-create the traditional family, and protect Religious Freedom.  This explains why the atheist, the immoral and the murders outside of his District fund his campaigns

Jim and Joe are caught in a time warp.  They are relics of the 1960s and do not understand that today’s Black Men and Women under 50 do not fear the KKK. They will kill the KKK.  They will not get shot by water hoses and bitten by dogs to have a hamburger with or use the bathroom beside a White Man. They instead go to their own restaurants and bathrooms. They are not interested in forced school integration and bussing.  They want school choice.  They do not trust the government to protect them nor do they want government protection.  They are tired of their right to self -defense being violated.  They do not want a handout.  They want to work.  They are beginning to notice the fifty-five years of failure.  They are now understanding that the Conservative is not their enemy.  It has been the Liberal all along.

If you like the ghettos of America today, you will love all of America in ten years if Jim and Joe get their way.  If Joe Biden was serious about helping Black America, Jim Clyburn’s endorsement would be toxic.  His twenty-five-year record of supervising a district that is the poster child for poverty, crime and murder is well documented.  Therefore, Joe Biden coveted this endorsement because he admires Clyburn’s work.

Most importantly, these two immoral men must always cause enmity and hatred amongst Black and White Christians. Joe Biden told a group of Black Americans, “If you’re not careful, they’ll (White Christian Conservatives) put y’all back in chains.”   Jim Clyburn, ridiculing historically low unemployment numbers under Trump, said: “during slavery, I guess we were in good shape because we all had jobs.”  Joe and Jim incite race hatred and stoke the fires of unforgiveness that perpetually condemn Black Americans to remain where all people consumed with hate and unforgiveness remain:  at the bottom.  Sadly, they have our nation on the brink of national suicide.

A New Black Leadership Is Needed!!!  No More begging for handouts!  No More Complaining about the Past!  No More Glorifying Victims!  No More Low Expectations!  We Want Results!  Theses Losers Have To Go!

Most people see the work of a prolific criminal or slave as immoral and an anathema.  But his crime boss will view it as work of art, worthy of accolades and rewards for accomplishment.  Joe Biden and Jim Clyburn, a crime boss, and criminal, master, and slave, see the ghettoes of the Black Community as a beautiful masterpiece.  They are proud of it. Why else would Clyburn run for reelection 12 times in a row?   Jim and Joe plan to mass produce this carnage all over America.  It is such a truthful illustration: The specter of these two relics of the old South standing side by side representing the Democrat Party. Like the “Portrait of Dorian Grey,” they are a visual representation of its poverty, crime, murder, and madness. You have been warned!!!